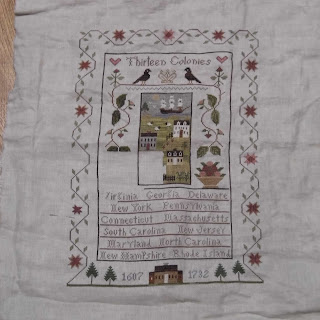 So, I've actually been doing a bit of cross-stitch lately - I have worked on this piece a bit over the past year or so, but only once or twice a month, rather than almost nightly. Lately, I've been trying to be better about stitching in the evening while watching telly rather than just being on my phone - it's tempting, especially when one is tired, to just sit and veg. Anyway, this piece is nearly done - there's a bit of the left border to do, then the bottom left corner of that centre bit and another planter like the one on the right. And a few little bits, like there is a spacer symbol of some sort between the states' names. But it shouldn't take much longer to finish, especially if I keep up the nightly work.

Here's the last photo I can find of it - but I've certainly added quite a bit since this photo was taken, before this week - for instance, most of the state names have been done for quite a while. 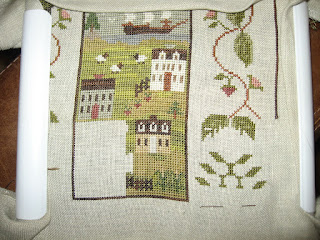