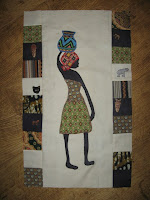 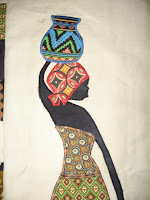 As promised, here's the African applique block I made for Helen - it's a woman carrying a pot on her head. I'm gonna go out on a limb here and assume you probably worked that out anyway... I took the design from a wax batik wall-hanging I have in my sewing room, which came from Uganda - I traced the design of one of the two women in the hanging - she faces the opposite way, but that's ok. I modified a few other elements to make it easier to applique, but basically, it's the same woman. It was a fun block; I enjoyed doing it. I don't do tons of applique - it's not a favourite - but I do like it from time to time, especially on the machine (you guys knew I'd say that, right?)

It looks wonderful - and yes I knew what it was before you told me.

That is awesome! I have several of those fabrics in my stash and would never have thought to do that with them!!!

Great job! I wish I liked applique more but it is not a favorite with me either.

shes gorgeous, and i love your choice of fabrics!